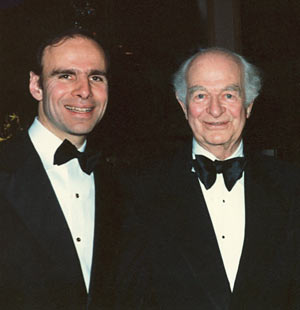 Most people under the age of 40 have never heard of Linus Pauling in any connection other than as a promoter of the health benefits of vitamin C. In fact, those under the age of 50 may not know of Pauling’s accomplishments as a researcher, educator and administrator in the field of chemistry between 1920 and 1940, when he developed quantum mechanics and laid the groundwork for molecular biology—all before World War II. After the War he wrote his famous chemistry textbook, one that influenced a generation of college students and has remained in print almost 50 years, one of the longest running books in print today.

In its way “How to Live Longer” compares with this classic on general chemistry and may stay in print just as long, for it is actually a practical review of medicine by this scientific genius. We are not likely to see a better or clearer single source of health information for quite some time. Pauling’s insights led him to the concept of orthomolecular medicine: the use of substances naturally occurring in the human body, in maintaining health and treating disease. This is the essence of this book.

Keep in mind that Pauling was a major force in the creation of modern chemistry. His method of describing atomic and molecular interactions, applying quantum physics to chemistry, had an influence on all chemists from 1920 to 1950. His work in the chemistry of proteins led to the title “father of molecular biology” as early as the 1930s. He understood free radicals and, in fact, named the superoxide radical in 1939. His research led to the first scientific demonstration of a molecular disease, sickle cell anemia, in the 1940s. At that time he was also one of the original founders of the National Institute of Health. His impact on modern medicine is so far-reaching that we might rightly think of him as a “father” of modern medicine.

The last 30 years of Pauling’s life was devoted to the study of nutritional substances in medicine—as the basis for ortho-molecular medicine. There was much more than vitamin C at stake. Ortho-molecular medicine referred to “the right molecules” as the major players in health and disease. After this the orthodox medical authorities could no longer ignore nutrition as they had been doing since before the Second World War! Pauling gave it scientific credibility.

Pauling’s writings on orthomolecular medicine succeeded in putting the medical establishment on notice and despite the controversy and ridicule that erupted, this opened the way for nutrition to become a primary part of modern medicine. But the backlash against Dr. Pauling’s reputation was greater than anyone could have anticipated. He could not anticipate that, within a decade of receiving two Nobel Prizes, he had actually outlived the memories of both the public and the scientific community! The medical “authorities” had been educated after World War II and were out of touch with Pauling’s work in quantum chemistry that was performed before 1940. And his military and wartime contributions were classified and secret, including his consultations with his friends, Einstein and Oppenheimer, on the atomic bomb project.

Pauling’s second Nobel Prize was awarded in 1961, for his heroic efforts to halt atmospheric nuclear testing and to educate the public to the dangers of radioactive fall-out. He waged a public campaign to sign up over 10,000 scientists in support of the nuclear test ban; and he did it over the objections of Senator McCarthy, Senator Dodd, J. Edgar Hoover and his FBI, and almost all of Pauling’s colleagues at Cal Tech, where he was Chief of the Department of Chemistry. Few people seem to realize that but for Pauling’s courage and strategic intervention against atomic testing, there is a good chance that many millions of us would have been harmed by the unbridled releases of radiation by both the United States and the Soviet Union. What people do remember is Dr. Pauling was involved in the Peace movement—not chemistry or medicine.

And so by 1970, when his book on Vitamin C and the Common Cold was published, his qualifications as a medical authority were largely forgotten by the public, which is not surprising. But they were also forgotten—and denied—by the medical and science establishments, which is disgraceful! As a result, his applications for research funds to study the effect of vitamin C on cancer were turned down—eight times by the NIH! How else can you explain the unprecedented refusal of the National Academy of Sciences to publish his paper on cancer and vitamin C? Instead of the respect he deserved, he was treated as if he were less qualified than an ordinary graduate student. His mastery of mathematics, statistics and scientific method was over-looked by this new generation of academicians and physicians, who were caught up in the entrenched political-economic power structure.

Pauling’s greatest accomplishment may turn out to be his concept of orthomolecular medicine. If so, his book: “How to Live Longer and Feel Better” may be seen as his crowning achievement—because it is so practical. It has not won the accolades that it deserves; but I predict that it will be re-published for the millennium 2000, and it will turn out to be as correct as if it were just written. It is the classic book on health.

Linus Pauling made only one mistake: he was too far ahead of his time. He could afford to be 20 years ahead in chemistry; because the industrial world was ready to steal his ideas and make many people rich. But he could not succeed by being forty years ahead of the medical profession, because by being correct, the family doctor and the corner druggist must lose out to the nutritionist. No way could an entrenched establishment permit that to happen.

As for the public, few people could see beyond the propaganda about “miracle drugs” and “modern surgery.” Nutrition and vitamins are just too simple. And the propaganda against vitamin C for viral illnesses and cancer has been so persistent, over twenty years, that few people remember that Pauling’s research and writings on these subject in the 1970’s is the basis for much progress in AIDS research, cancer research and antioxidant medicine today. Instead, the public mind is saturated with unresolved controversy and no acknowledgement that Dr. Pauling actually succeeded in an historic way: he sparked a revolution in medical research and practice.

Dr. Pauling was truly excited about the benefits of vitamin C against cancer: “In all my years in scientific research, I have never seen a project that offers more hope for mankind than the one now under way at our laboratory.” He was convinced, by the results of his research in association with Ewen Cameron, that vitamin C has a large life-extending effect, even in advanced cancer cases. But he lacked the funding necessary to pursue his studies and make them definitive. Recently Abram Hoffer has confirmed that there is a 20-fold increase in survival time in cancer patients treated by vitamin C and general ortho-molecular nutrient support.

Naturally, Pauling was angered by the fact that National Cancer Institute, funded by HEW (Department of Health, Education and Welfare), was spending over 800 million dollars annually, while his work with vitamin C and other nutrient therapies was totally ignored. It is galling to realize that after 20 years of billion dollar spending, the War on Cancer could report almost no progress in cancer control. Orthomolecular medicine, meantime, with almost no budget, was having an impact on the public and some research professionals. Large-scale nutrient trials are just now beginning to confirm what we have known all along: nutrient therapy is a promising avenue in cancer treatment. Just ten years ago it was considered pure quackery and criminal! Now the tide is turning—for which we owe a lot to Linus Pauling.

It has not been easy. For the past 20 years the major medical journals, such as Journal of the American Medical Association and the New England Journal of Medicine, have refused to publish Pauling’s letters of rebuttal. And the medical establishment supported a propaganda organization, the National Council against Health Fraud, strongly targeted against the nutrition movement and its leading protagonist, Linus Pauling. Few reporters could tell the difference between the lack of qualifications of members of the Council and Dr. Pauling the leading scientist of this century. Somehow the reporters failed to notice that the quack-buster’s major accomplishment has been to withhold information and confuse the public by denigrating new ideas.

Perhaps such skepticism does some good against the more egregious charlatans of the world, but not against a great scientist, like Linus Pauling. And who is qualified to do so? Are the quack-busters better trained and more accomplished at basic research, molecular biology, and statistical analysis than Linus Pauling, an acknowledged mathematical and research genius? Whose credibility is more reliable?

One way to make this real for yourself is to study Dr. Pauling’s advice and try it out so that the results will speak through your own body. You may be surprised at how familiar this advice has become. Hard to believe that one of our greatest scientists could be ridiculed for such advice, just because he was more explicit and comprehensive than any of our orthodox medical authorities when he first proposed this program almost 20 years ago.

Dr. Pauling was impressed with the possibility of extending human life span through nutrition—especially vitamin C, which confers at least an 8-year advantage. Pauling’s calculations led him to the conclusion that human life span could be extended by over 20 years through orthomolecular therapy: the right molecules in the right amounts. That is why he wrote his book. If you follow his 12 suggestions, you very well might add precious years of health and happiness to your own life. Never before in history did we have a right to expect such a benefit. This is truly one of the great advances of the 20th century; a century that owes much to Linus Pauling, for his contributions to chemistry, molecular biology, peace and health.

Ola Loa SPORT Hydration Fuel is what I drink to get me through.

This is the best vitamin drink on earth. Tastes great and good for you.